We’re very fortunate to live near Cardiff Bay. When it’s warm and sunny, it’s at its best but you can’t beat an evening down The Bay either. We love comedy and regularly go to The Glee Club for a laughter fix. We’ve been to most of the bars and restaurants down there but until this week had only ever been to Bill’s Restaurant for brunch. Pancakes every time for me!

This week we went to see Calendar Girls in The Wales Millennium Centre so popped into Bill’s for a bite to eat beforehand. They have a pretty good value dinner set menu which offers plenty of choice. Three courses for £19.50 and the best dessert I’ve had in a long time means we’ll definitely be going back.  Mr. C’s Chicken & Sesame Dumplings Starter was absolutely scrummy and my Pecan Pie with vanilla ice cream, cinnamon cream and hazelnut crumb positively melted in my mouth.

The staff were perfect, always there when you needed them but not hovering over us all the time.  Informal, casual dining at its best and all with a great view too,.

We spent a lovely couple of hours there before moseying over to the spectacular Millennium Centre for the show. Now we’ve seen the film of Calendar Girls obviously and had no idea until recently that there was a musical of the same name. Well there is, and ‘Calendar Girls – The Musical’ is the result of Gary Barlow and Tim Firth’s collaboration.

It was bright, colourful, funny, moving and uplifting. It had all the same ingredients as the film but with the added extra of music. I’ve got to say that when it started I found the music a little underwhelming.  However as the show warmed up, I found myself humming the tunes under my breath. In fact both of us left the show with an Earworm that night. Various versions of ‘Yorkshire’ and ‘I Had A Little Work Done’ that we simply couldn’t stop humming and singing along to.

Talking about the show afterwards, Mr. C said he didn’t feel it was as good as the film. However, as a woman watching, I kind of felt like I was in the same club as the cast members. All women together, supporting each other, laughing and crying all at the same time. It was a real feel-good moment when the ladies. all of a certain age, started to disrobe for the calendar photographer. The cast members were helping each other, like mums on a beach holding a towel up for their children to get changed underneath.

We cheered as each and every one of the ladies had their moment and their pictures taken. A cheeky bare bottom here and there caused roars of laughter and we all applauded as even the most prudish of the WI members undressed for the cause!

The set was impressive for its simplicity allowing the cast members’ personalities to really shine through. The green, green grass, the cheerful sunflowers, the uplifting music and the good, honest plot line all melded to make for a real feel-good evening. We laughed, we cried and came away with big smiles all over our faces. What more can you ask for from a night out! 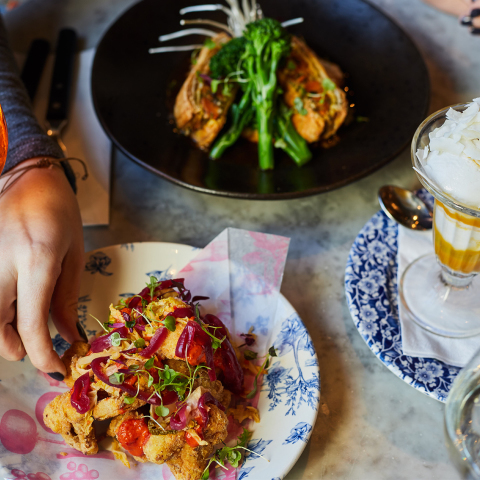