Ok so what’s the consensus on slogan t shirts when you are past ‘a certain age’?  Way back, some time after my 40th birthday, I read a piece in a glossy woman’s magazine, about what you should and shouldn’t wear after you’ve passed various birthday milestones. No hot pants after 30, no jeans after 50 – you know the sort of article I mean! The type of feature which used to dictatorially and arbitrarily declare that women shouldn’t have long hair after 40.  Well, my hair’s shoulder-length and I’m nearer 60 than 40.

Anyway, I read that slogans on tops were far from ‘de rigeur’ once you’ve past your 40th.  What, no more golf crowd t-shirts!  At the time I regularly used to wear a cerise, super-soft long-sleeved T-shirt which happened to have the word ‘Cheeky’ across the front. I  liked the colour, loved how comfy the top was and didn’t think twice about its age-appropriateness.  Yet once I’d read that, I never felt quite the same about wearing it.

I’m not generally a conformer so it’s odd that I took notice of the not very wise words from the style icons in MarieClaire/Good Housekeeping/Cosmopolitan or wherever. I think as much as anything it’s made me think how nonsensical it is for anyone to tell anyone what they can and can’t wear.  I don’t wear denim but I know plenty of people older than me who do and look ok. Jeremy Clarkson is a bit of an exception there with his baggy old Dad Jeans. Think Helen Mirren, over 70 and wearing that red bikini.  And why not?  She’s got a great figure and looks better than many women half her age. And to be honest, even if she wasn’t a fine figure of a woman, why shouldn’t anyone wear what they want and when they want. 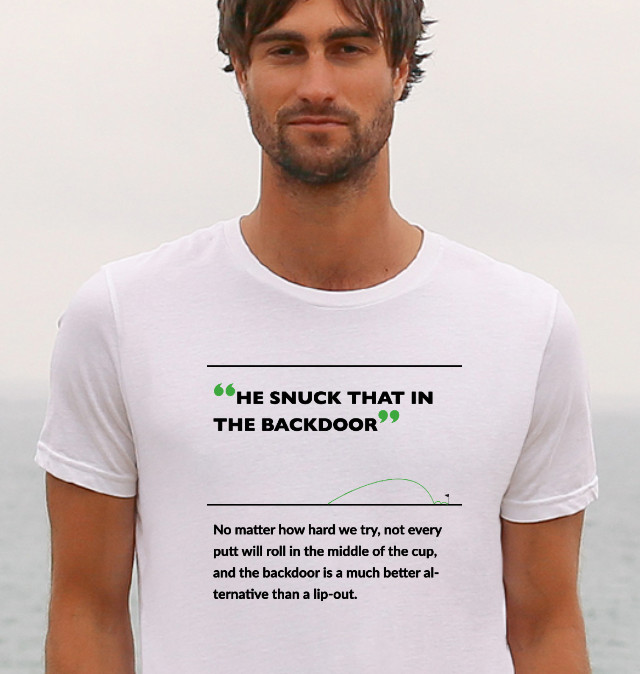 I suppose there are occasions when the sort of slogans you get on some of the t shirts you can buy as mens golf gifts may be a tad risque.  There’s a time and a place for everything after all.  It would be simply common sense and  respectful, not to wear a slogan  tee-shirt like the one above to your Great-Aunt’s funeral.  However what if it was your mate from down the golf club?  The one whose middle name was ‘banter’? He’d have seen the funny side of it and his friends and family likewise.

Nah, live and let live. It’s Mr 50 Plus’ fifty-somethingth birthday tomorrow and I may well have bought him an edgy tee-shirt. And why not!